Innovative attempts have been proposed to use the renewable energy resources so that the repercussions of the extensive use of natural resources on the environment can be substituted or reduced. Solar Impulse which is headed by Switzerland and backed up by major companies like Omega, Schindler, ABB and Google are all set for an exploration to change the world of aviation. Bertrand Piccard and André Borschberg are set to explore the world on a solar-powered aircraft! Yes, you heard it right. Only solar power to run the entire aircraft which can be one of the major onsets in the field of science and technology using renewable energy resources for long distance travel.

The Solar Impulse idea had been germinated in the year of 1999 when Bertrand completed the world balloon flight. He along with Andre Borschberg have managed to break through the design of a solar-powered aircraft which was presumed to be absurd by considering the weight, the size, and the maneuverability. The main message behind the Solar Impulse is to enlighten the fact that we can use a lot of renewable energy resources and thereby create a cleaner environment for our future generations to come.

The Solar Impulse looks similar to a 2 seater plane but apparently carries only one pilot, having a wingspan similar to the size of Airbus 340, which is not less than 72 m. This long wingspan includes 17,248 solar panels which can power 4 electric motors run by (4 * 21 kWh) lithium ion batteries weighing 450 kg, providing 10 HP each. These solar panels can store 340 kW per day. The electric motor is similar to a motorboat. The design of Solar Impulse 1 began in the year of 2004, and after a lot of efforts considering the parameters of aircraft design the prototype was successful in taking its first flight in December 2009, flying for about 350 m and 1 m above the ground – a test flight which was successful. It surpassed the landmark and set up a new record for 26 hours which was the longest flight ever flown by a manned solar-powered aircraft. The entire weight of the Solar Impulse 2 is around 2,300kg which is similar to a Toyota Fortuner. The Solar Impulse 2 will fly at lower altitudes and speed during the night to save the energy that has been stored for the flight. 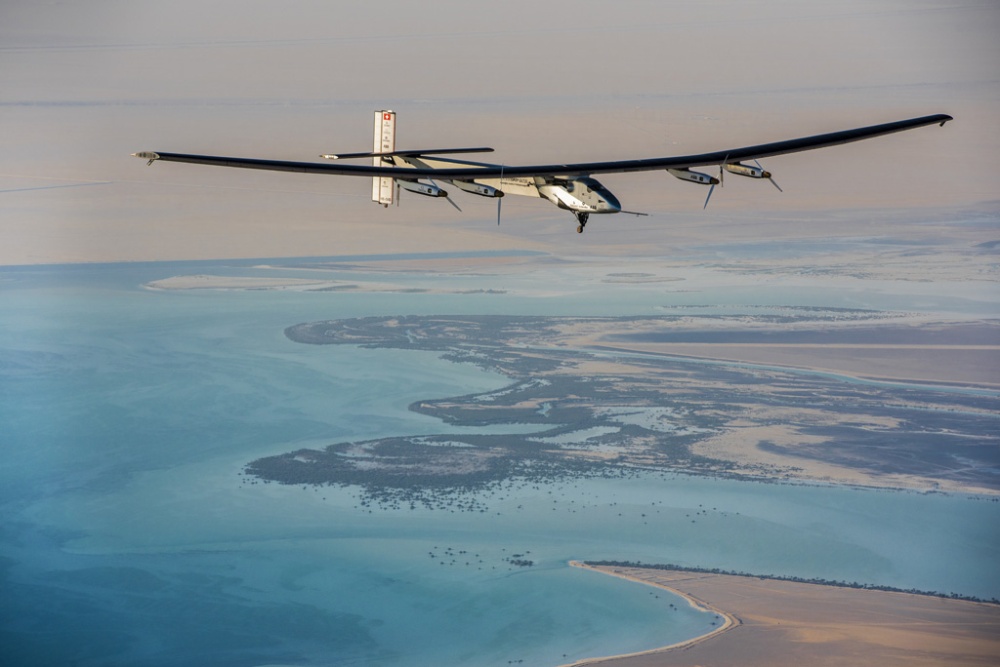 Solar Impulse 2 has been planned to complete the journey of the earth in 25 days spread across 5 months. In all 12 stops are expected to be taken just for the change of pilot. The maximum speed the Solar Impulse 2 will cruise is between 50 – 100 km/hr. The journey of exploration by a solar powered aircraft was set to be commenced and completed at Abu Dhabi. Its flight plan for the entire journey is:

Till date the aircraft has completed the flight till Hawaii. The Solar Impulse 2 set a new record for being in flight as the world’s longest solar-powered flight both by time and distance which is 117 hours, 52 minutes and 7212 km respectively. Due to some damage to the batteries the flight is expected to be back in action by April 2016 so that the long flight can be resumed from Hawaii. Until then Solar Impulse will be in solace and under maintenance. The estimated cost of the Solar Impulse project is around 1000 crores INR whereas ISRO had completed the Mangalyaan Mission to Mars under 450 crores INR.

Many hopes and aspirations have been set on this project of Solar Impulse as this can be the breakthrough for a new era of low noise, fuel-less aircraft and that can conserve the non-renewable energy resources and provide a better tomorrow for the future generations.