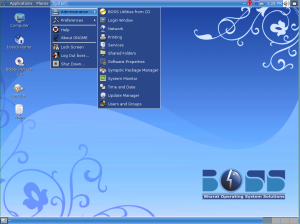 I was 6 years old when I first saw a desktop which had a CPU below the monitor. It was in the mid-1990s. 20 years and we still see the Windows operating system on 99% of the computers or laptops, nevertheless to those who can afford a Mac; it has its own operating system. The Indians have finally thought of some alternative which began in 2006. They have been working diligently for almost 8 years on a project which will be launched by the end of this month. Finally a desi touch to the operating systems is going to be launched in this month as per the reports. The first ever Indian made operating system named as BOSS, acronym for Bharat Operating Software Solutions will hit the market soon. This should be a breakthrough to one of the many aspirations of the Indian government of the “Make in India” campaign.

To brief you about BOSS – it’s a free and open source Linux distribution developed by NRCFOSS( National Resource Centre for Free/Open Source Software) of India. BOSS was developed by Computer for Development of Advanced Computing (CDAC), Chennai. BOSS GNU/Linux has been certified by Linux Foundation.

The embryonic stages of BOSS started from 1.0 and it found a number of development stages with the code names of Sethu, Tarang, Anant, Tejas, Savir, Anokha, and the latest Anoop. The latest version is BOSS 6.0. The latest version supports the Intel 32 and 64 bit architecture with the latest Kernel 3.16. A Kernel is responsible for interfacing your hardware and the software with better performance. Having a better Kernel provides better security, memory management and better performance. BOSS 6.0 can support all the 20 official Indian languages and includes Contacts, Photos and Music that is required for a better desktop appearance.  A number of other features which includes office application software, internet access software, file sharing and multimedia options.

The main idea behind using a self – made OS is for the adoption and implementation in our government bodies and check for its reliability and security. There has been recent breach on the Indian data security by the Chinese hackers and our country is been monitored especially by US and China. The new version of the OS has not yet been cracked by the Indian army. The test results are satisfactory, and because of the new codes and development techniques it may be used by on a larger scale soon. On the other hand China is releasing its operating system soon which is compatible on mobiles, PCs and notebooks. On the contrary, BOSS would work on notebooks and PCs. Research for its mobile compatibility is still under progress.

Most of the Indian banks will be updating their ATMs with BOSS. The Tamilnadu government has advised mandatory installation of BOSS in all its departments. We all will see a major change once our government agrees to go with BOSS after it has checked for its reliability and security. It would impact the Indian currency as most of the computers use Microsoft. But as every idea has its pros and cons there would be a need of a better customer support when this OS will be out in the market. Let’s keep our fingers crossed and hope to see a new report with regards to the same.

2 thoughts on “Yeh to Indian hai “BOSS” – India takes a leap for its self-made operating system!”