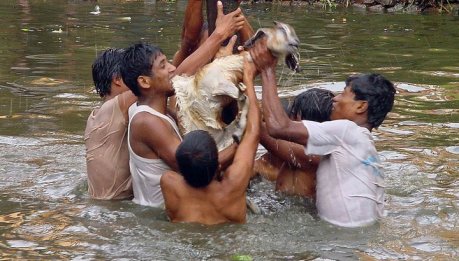 Why on Earth would someone torture an animal and be insane enough to sacrifice her on the religious notes of God? Is that all God wanted? Did he give life to all the creatures especially animals that are unable to produce the language which we humans understand just to be sacrificed and be a part of the food chain? If it’s a “NO”, then you should just have a peek at a municipality named Khokana in central Nepal who follow this age old tradition of sacrificing animals especially a young female goat – torturing it by drowning it in a pond and annihilating it by bare hands and teeth of human beings. The man who is judged to have eventually killed the goat is named a “hero” and leads a dance procession which follows. Try the YouTube or some other search engines for the video of it, you would find it distressing and would probably spew out.

Most of the news channels have covered this topic and it has received ire from most of the Animal Welfare Community who are pestered by the ongoing slaughter. Is that we all care about? Killing animals regardless of any motive of it? Even if any motive, then isn’t there a better reason to back that up rather than pushing it to the boundaries of worshipping God. This is mentioned as the 900 year old tradition of the people named Newari.

This is not what all the mavericks do by educating themselves as well as others. The sacrifice has to be stopped because this is not what has been taught to us, rather we don’t have a right to kill innocent and innocuous animals. There should be a strict prohibition on rendition of such dreadful acts. The Government should consider these heinous crimes and they should set a quintessence of the utopian judiciary system.

The same municipality has been nominated to be listed as a UNESCO World Heritage, representing a vernacular village and its mustard-oil seed industrial heritage. It is known as a living museum and recalls medieval times. Look at the contradiction where some good things are known for its sheer existence and now the same thing will dwindle because of such horrendous acts.

I guess the government should put its step firm in annulling such acts and provide a better education to stop them so that we as a nation or we as a human being can come together and provide some life and soul to all these creatures who can hardly communicate with their power of speech. God has created life not only for human beings; the animals and birds are also innate, who have a right to live peacefully. Don’t be barbaric and let all creatures on earth have a right to live.

If you feel this needs to be curbed, please sign the petition by Change.org, a noble cause for alleviating all the horrendous acts.